The 49.8 metre Heesen superyacht Project Nova has been launched in Oss and named Home. Construction began on speculation and the project was sold in July 2016, with the client bringing in Italian designer Cristiano Gatto to transform the interiors of Project Nova. 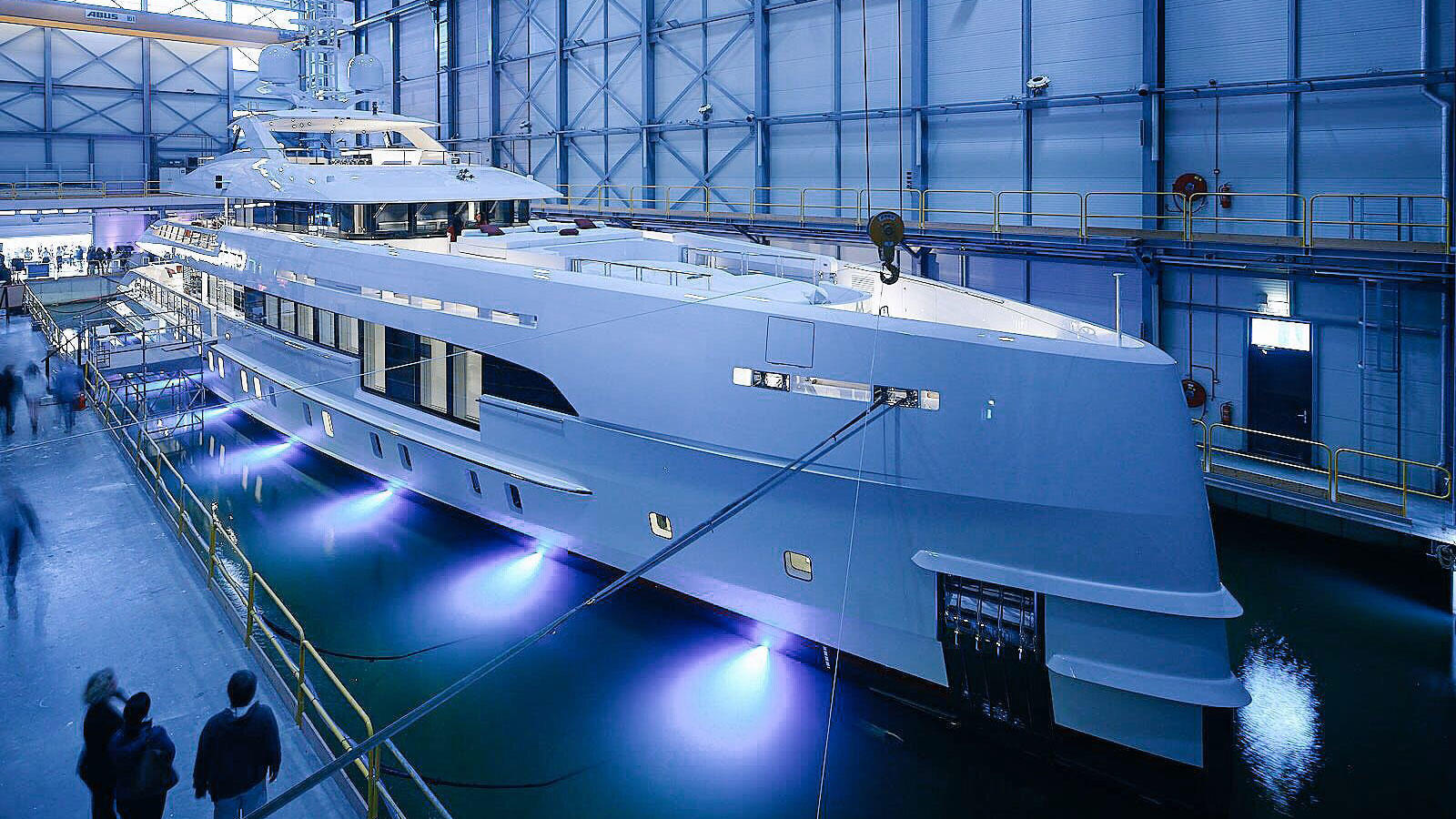 The owner is described as a yacht enthusiast who has owned multiple yachts before, however Home will be their first Heesen. Delivery is scheduled for June. Thom Conboy from Heesen Yachts USA said: “The client was attracted to this project for several reasons including its unique and modern exterior as well as its modern, high-tech interior design.”
Gatto worked closely with the owner’s team to personalise the interiors and added, “The owner asked us to modify the colour scheme, design details and overall decoration to give the interior a contemporary design.
This can be seen in the use of matte finishes, linear styling and freestanding Paola Lenti furniture. Gatto explains that there was a strict colour palette of white, grey, silver and burgundy, with the different materials and finishes used to create a distinction between areas. The woodwork is split between brushed spruce and grey Koto, while the en-suites have been fitted with Nero Setta and Bianco Neve marbles.
Key features include the superyacht sundeck, which boasts a 4.8 metre bar area finished in translucent Corian and sheltered by a large hardtop, while a circular superyacht spa pool is situated aft. Al fresco dining is provided on the upper deck aft around a circular table, while the upper saloon features Flexiteek flooring and loose furniture, blurring the distinction between interior and exterior spaces.
The main deck features a similarly relmodern stylea glass-sided veranda leads into the main saloon, with its L-shaped sofa and indoor dining area, which seats ten guests around an extendable rectangular table.
This all-aluminium yacht introduces a new breed to Heesens lineupadding a hybrid propulsion system to the innovative Fast Displacement Hull Form (FDHF) that was developed by Van Oossanen Naval Architects.Heesen Yachts built the worlds first FDHF yacht with the

Home also puts a priority on silence, the ultimate luxury. Heesens Mark Cavendish predicts that Home will register 46 decibels of noise in the owners suite while cruising in electric mode.
The owner and guests will enjoy a vastly quieter environment,said Cavendish. To put this in perspective, 46 decibels is the equivalent volume level of soft rainfall.
Exterior styling comes from Frank Laupman of Omega Architects, who has penned the striking superstructure and an almost vertical bow, which will reduce vertical acceleration, thus improving on-board comfort. Home is amodern, innovative yacht with striking lines and a lot of glass,said Laupman.More like a beach villa in style, with nature all around you.This effect is enhances by cutaway bulwarks and floor-to-ceiling mirrors that help to bounce light around the spaci”Project Nova launched by Heesen and named Home” src=”https://www.phoenicianboat.com/files/news_files/images/2017/4.%20April/09.%20Project%20Nova%20Launched%20by%20Heesen%20and%20Named%20Home/Heesen-nova-aerial.jpg” style=”width: 100%;” title=”Heesen nova aerial” />
Home will accommodate 12 guests split across six staterooms, including a main-deck owner’s suite with it’s own superyacht office and walk-in wardrobes. On the lower deck, the guest accommodation is separated from the engine room by the superyacht gym, which has been fitted with a Technogym exercise bike and a set of Bow Flex freeweights, while a zero-speed stabilisation system further enhances her blue water cruising credentials. Tender storage is provided via a foredeck crane, leaving the transom clear for guests to enjoy the large fixed swim platform.
Following her debut season cruising Norway and the Mediterranean, Home will cross the Atlantic with the aim of making her public debut at the 2017 Fort Lauderdale International Boat Show. The owner was particularly drawn to the yacht’s shallow 2.1 metre draught, which makes her well suited to cruising the Bahamas.
Other superyacht projects currently under development at the Dutch yard include the 55 metre Project Alida, which is due to launch before the end of the year. 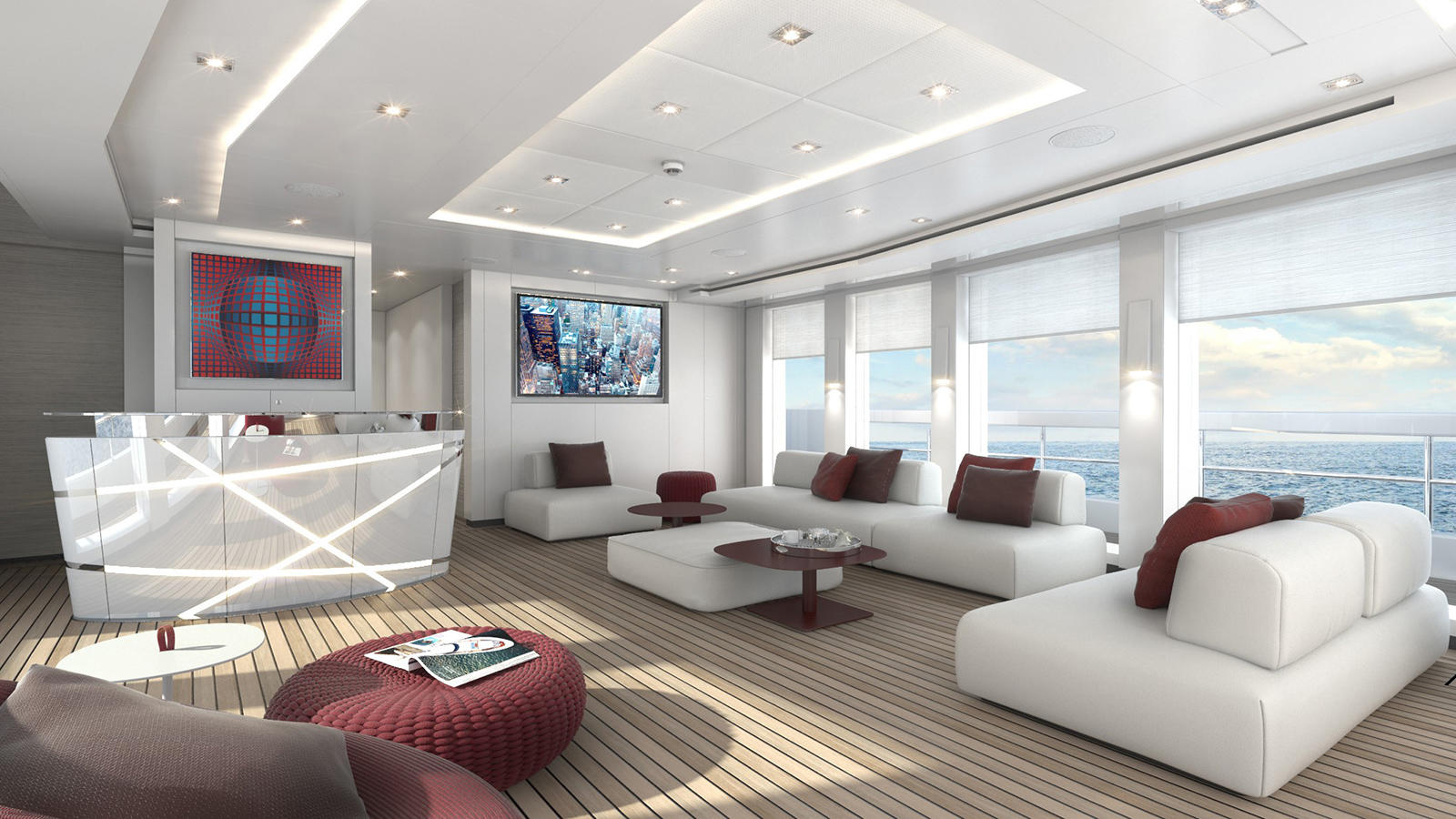