Azimut Grande S10, the new S Collection flagship, is the result of collaboration with designer Alberto Mancini, working for the first time with the Avigliana-based shipyard. A unique yacht, it is sporty but has impeccable class, skilfully bringing together in 28 metres of length the elegance of a megasailer, the architecture of a modern villa on the sea and, not least, the sporty personality of automotive design. Three highly original elements that co-exist here without friction and add an unprecedented dimension to a project that looks set to generate no little buzz.

An atypical and unrepeatable boat, the new S Collection flagship exists to amaze with its exclusive original features. The design springs from collaboration between the Avigliana-based shipyard and Alberto Mancini. Highly regarded for his purist approach, Mancini habitually draws inspiration from the aerospace and automotive worlds, which nows very well because of his training as a car designer.

Azimut Grande S10 is a sporty motor yacht but with class, more gentlemanly than typical sports boats and featuring flowing lines combined with exceptional performance. As it has done many times in the past, with this model Azimut Yachts again exceeds the usual market standards to chart a new course for the whole industry.

The design philosophy behind the Grande S10 is tied to the concept of total onboard liveability, based on three fundamental images.

The first image is that of a big, classically-styled megasailer, on which the slightly lowered cockpit amidships represents the fulcrum of social interaction, intended as the perfect refuge for relaxing and sheltering from the sun.

The second is that of a refined modern villa on the sea, with multi-level terraces leading gradually do same approach underpins the design of the Grande S10, on which a flush deck left completely free represents an unprecedented solution, offering a raised vantage point over the sea. It is also a space that the owner can furnish and use as they best see fit. With sun loungers, for example, which can then be removed when the sun goes down to create the ideal space for an evening party, or fitted with a jacuzzi area, or a simple but elegant lounge.

As can be seen, the terrace is a central element of the Grande S10, connecting with the liveability and social interaction of villas and megasailers. It is a space that communicates and converses with the sea, free of any visual impediments. The stern railing is a glazed surface designed to be almost invisible, establishing discrete and elegant contact between two settings on two different levels. Access to the full-beam beach club at water level is down hidden steps, in an innovative solutileaves the transom with even cleaner lines.

The exterior and interior settings, like the living area, communicate through fully recessed doors, while similar materials and colour shades accentuate the continuity between outdoor and indoor spaces.

The sporty feel of this model is expressed by the shapes used and the choice of materials. The carbon that began as a technical decision is now a style feature too: with its powerful black fiber in full view, it defines the edges of side fins that tilt towards the bow, conveying an intense sensation of dynamism. Carbon also replaces the classic steel manrope, which takes on a rather gun-like appearance and extends up to the bow, acting as the perfect containment for the sunbridge. We can think of it as the bodywork expanding and playing an increasingly import.

The term bodywork introduces the concept of car design, the third and last source of stylistic inspiration. Underpinning this idea was a meticulous study of how the sunlight and its reflections play off the water onto the yachts surfaces and sections, sculpting and emphasising its beautiful lines. The aerodynamic shapes are also underscored and enriched by the lighting design, in which hidden light sources make every setting more alive and intriguing. The light throws the yachts distinctive stylistic features into relief and gives the model an even more recognisable look. The central stairway too, which leads up to the flydeck, becomes an important design feature made of carbon and light, a central backbone that identifies the personality, unique design and perfect symmetry of the cockpit.

Finally, the superstructure stands out for the horizontal development of its surfaces, which ean cuts and contrasting colours so as not to penalise the sporty lines and to accommodate a generously-sized fly bridge.

This union of extraordinary inputs produces a powerful result. With this project, Azimut Yachts charts a new course: a boat with sports features but that also has a fly deck and the onboard spaces typical of a big motoryacht. It means offering something that wasnt there before, through the expression of totally innovative creative flair. 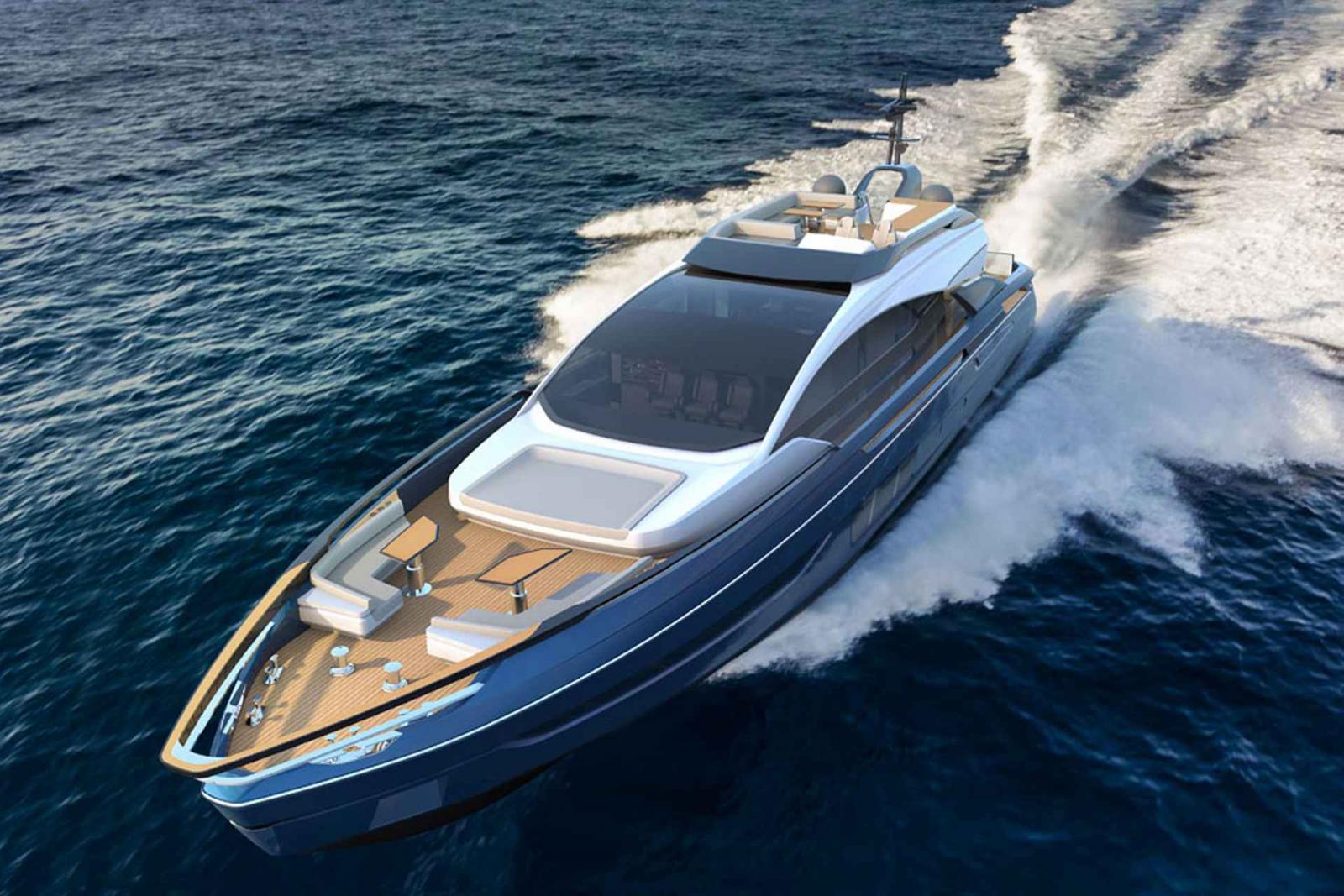 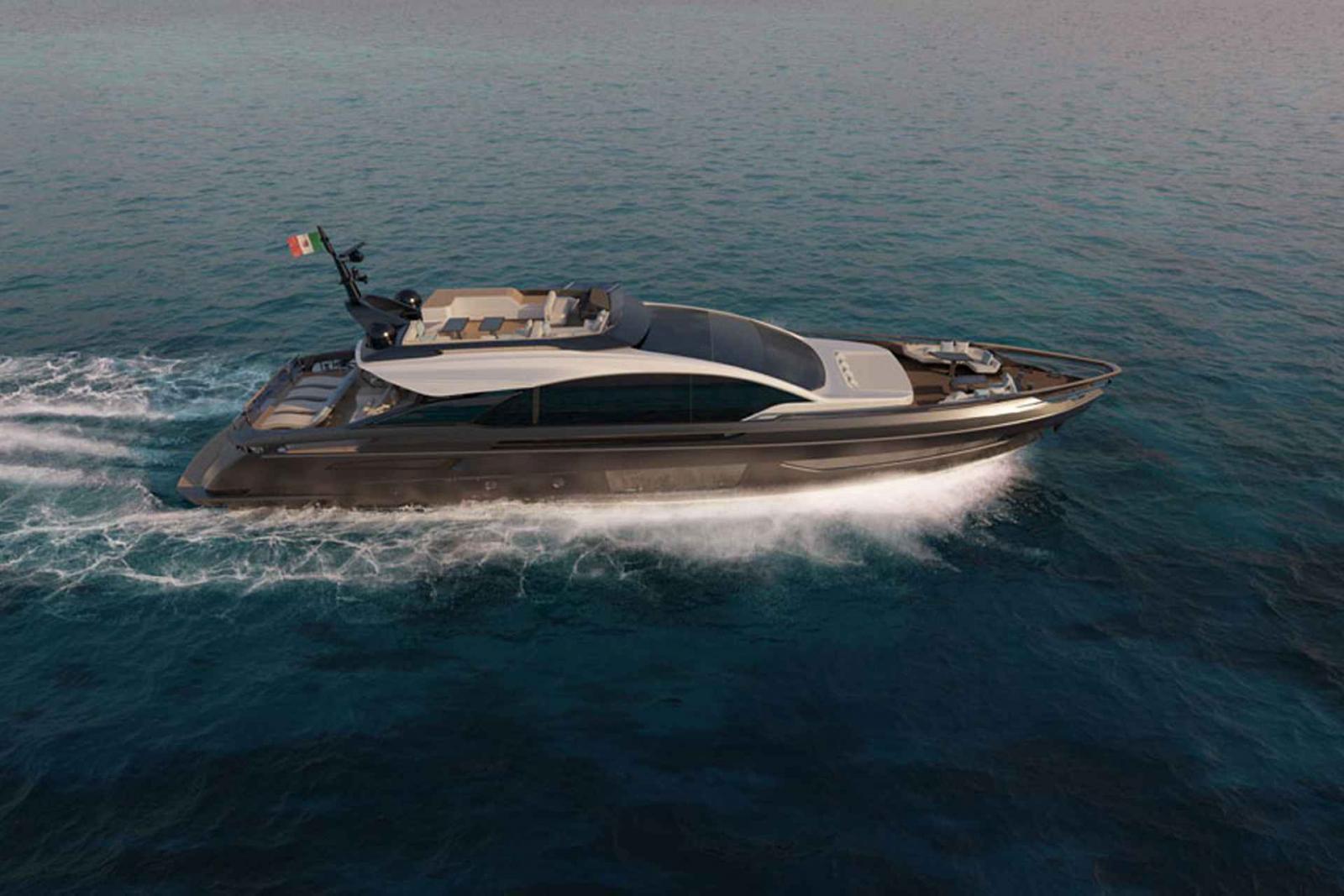 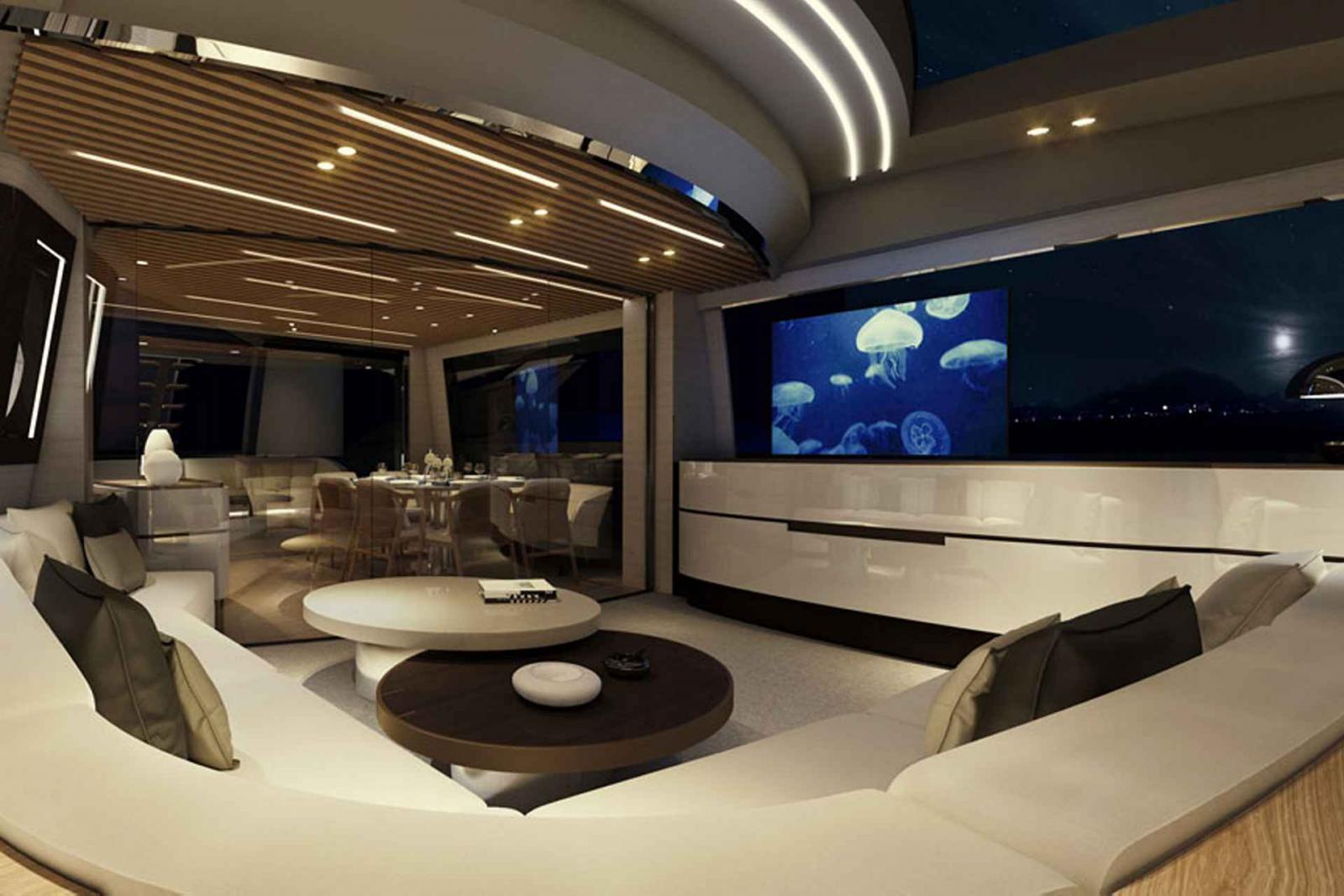 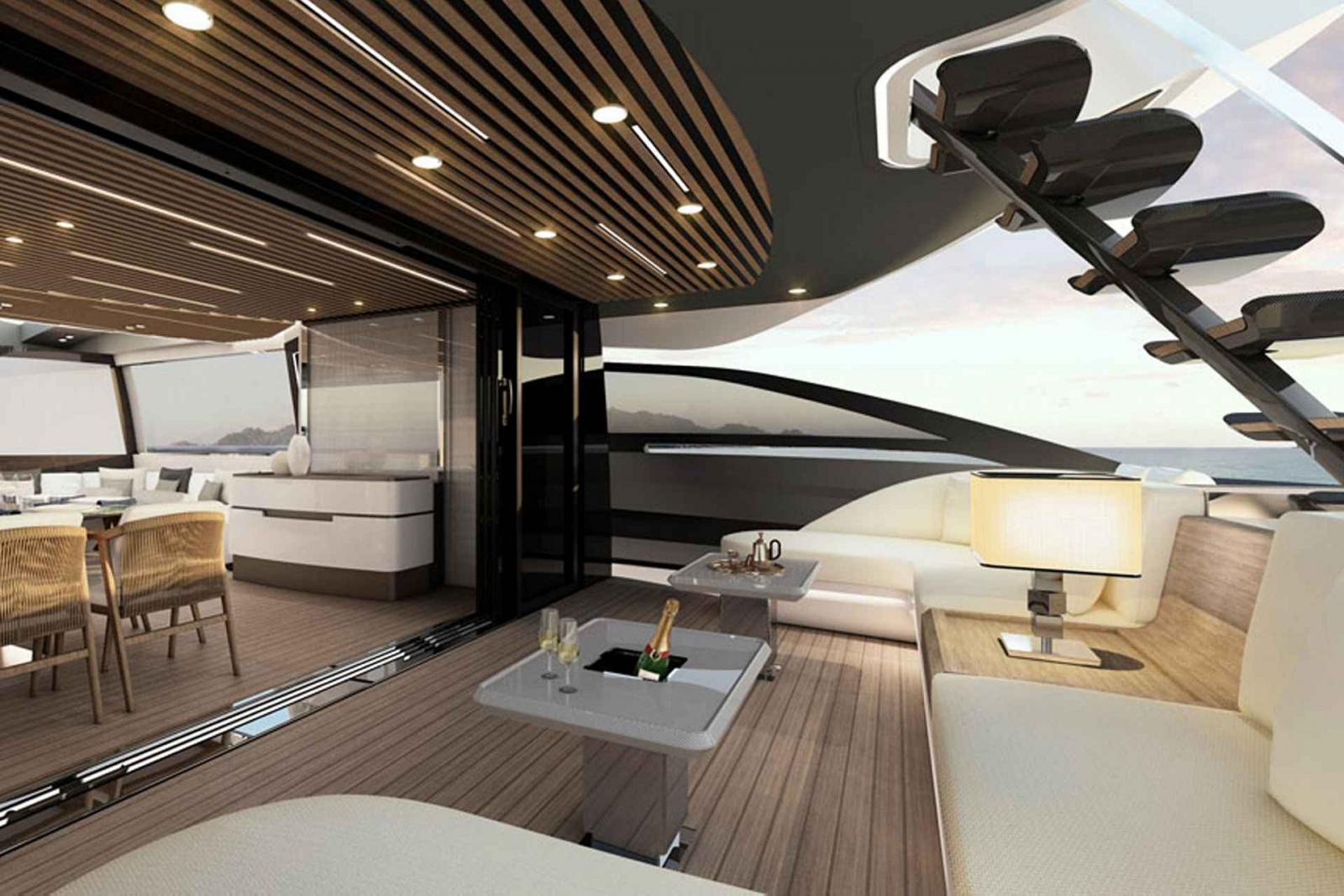 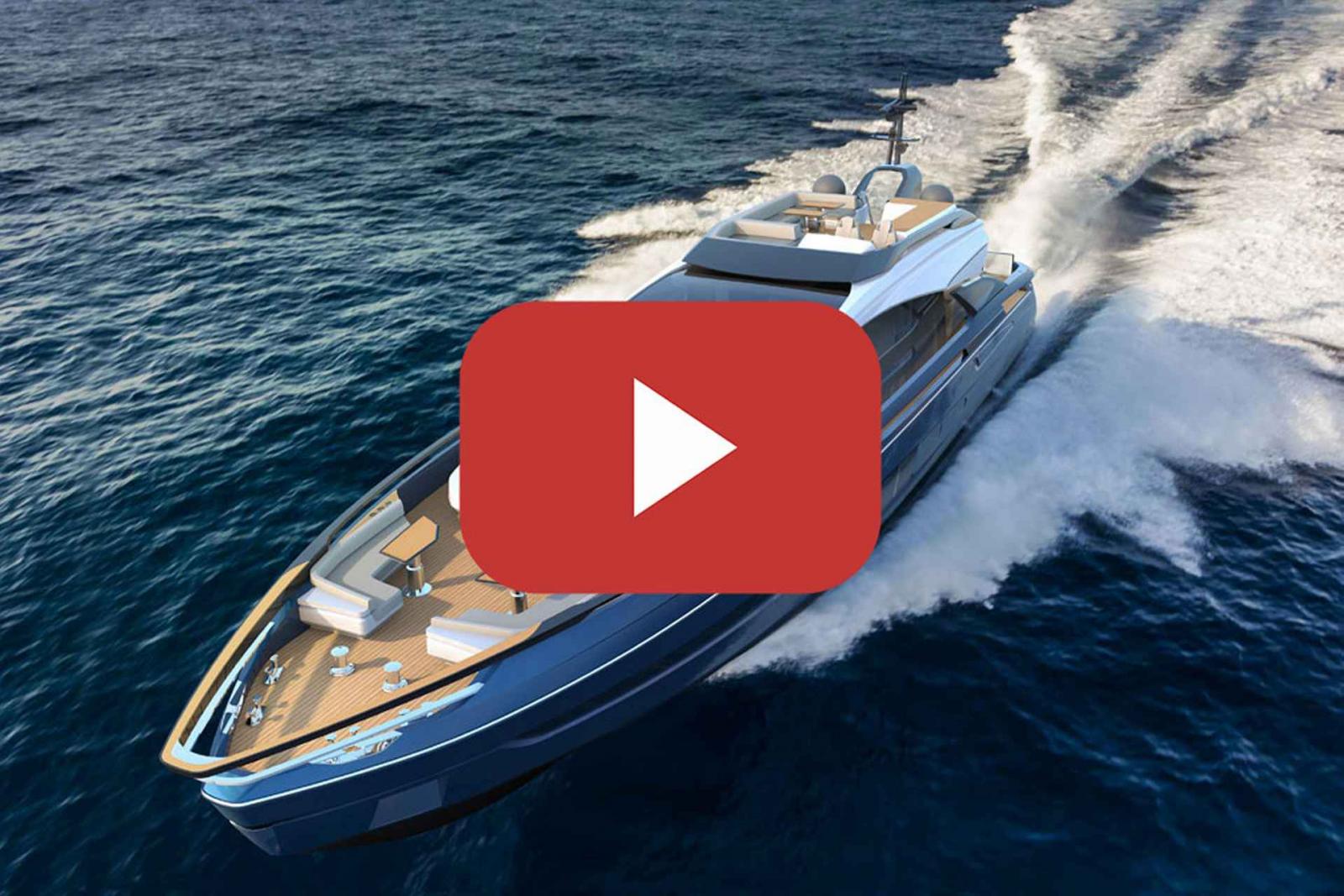