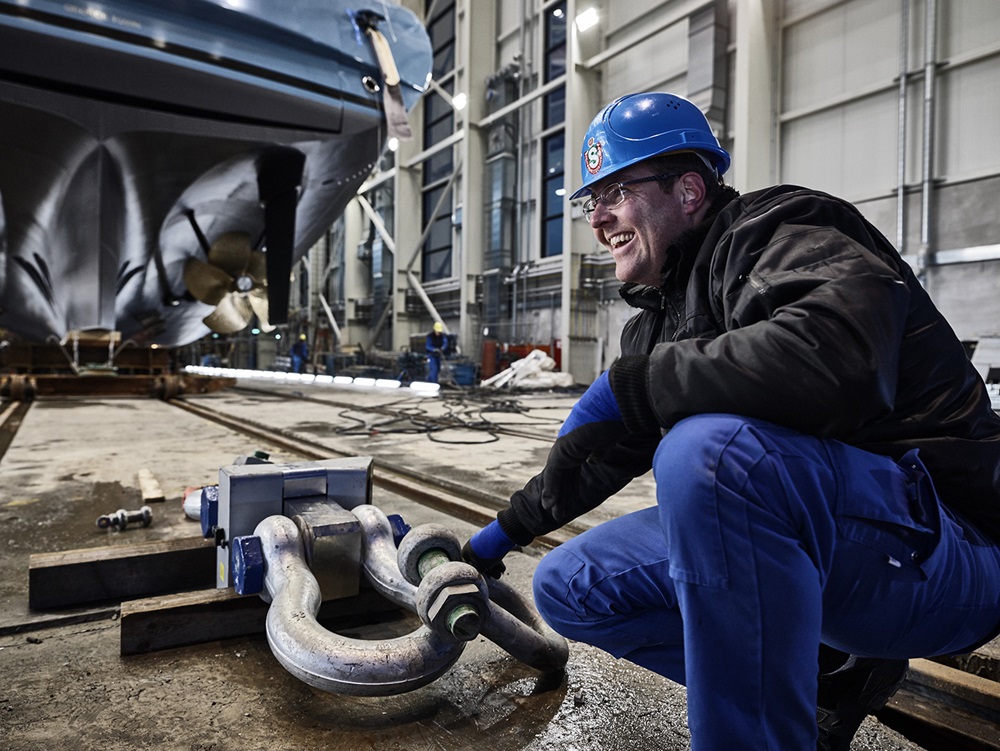 Launch procedures may seem mundane to the untrained eye. Sometimes, they even seem ahurry up and waitsituation. However, the prep work is what makes it all possible. And, when a shipyard shares how it tried something new, its worthy of a”http://abeking.com/” target=”_blank”>Abeking & Rasmussen has revealed details on how it moved Aviva out of her build shed earlier this month. Furthermore, Abeking & Rasmussen has revealed some telling construction details that will impact future builds as well. 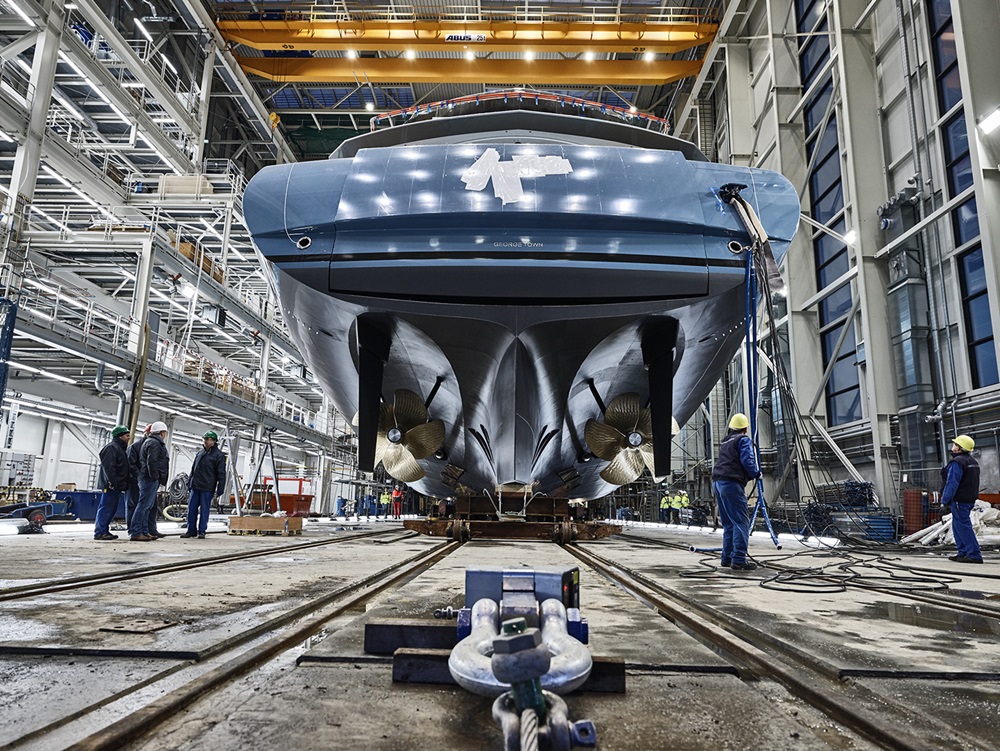 At 3215, Aviva is the builders biggest megayacht yet. The sequence in the gallery below shows how first, Aviva sat upon a hefty hydraulic platform trailer. An equally hefty winch clipped to the trailer, combined with 60 wheels on it, slowly rolled her out, transom first. The next step was maneuvering the megayacht onto a pontoon. Positioned at the edge of the shed, the pontoon isnt a permanent part of Abeking & Rasmussens property. Instead, it came from a specialist company in Norway, shipped in for the launch. Overhead cranes (the yellow structures visible in the build shed photos) lifted Aviva up and out onto the pontoon. Cradling equipment kept her securely in place as a tugboat towed the pontoon. Aviva later launched into the water, floating on her lines as expe”” src=”https://www.phoenicianboat.com/files/news_files/images/2017/January/46.%20A%20First%20Look%20at%20Aviva%2C%20The%20New%2098M%20Abeking%20%26%20Rasmussen/AR-98m-Aviva-4.jpg” style=”width: 100%;” title=”Phoenicianboat.com” />

As you review the photos, imagine how Aviva will look during sea trials. Abeking & Rasmussen says shes meant for a 20-knot top speed, pretty swift for her size. Also unusual, she has hybrid propulsion. The yard says the electric motors on their own permit an 11-knot speed. While specifics on the system are still confidential, the yard does add that its lower horsepower than typical for this type of yacht. Thats due to a hull design created to make the yacht more fuel efficient. In fact, Abeking & Rasmussen says, it results in 20 percent less drag.
“” src=”https://www.phoenicianboat.com/files/news_files/images/2017/January/46.%20A%20First%20Look%20at%20Aviva%2C%20The%20New%2098M%20Abeking%20%26%20Rasmussen/AR-98m-Aviva-5.jpg” style=”width: 100%;” title=”Phoenicianboat.com” />

Abeking & Rasmussen has also confirmed the inclusion of a paddle tennis court aboard, which we reported earlier this month. The dimensions: about 66 feet by 33 feet, nearly 20 feet high, too. 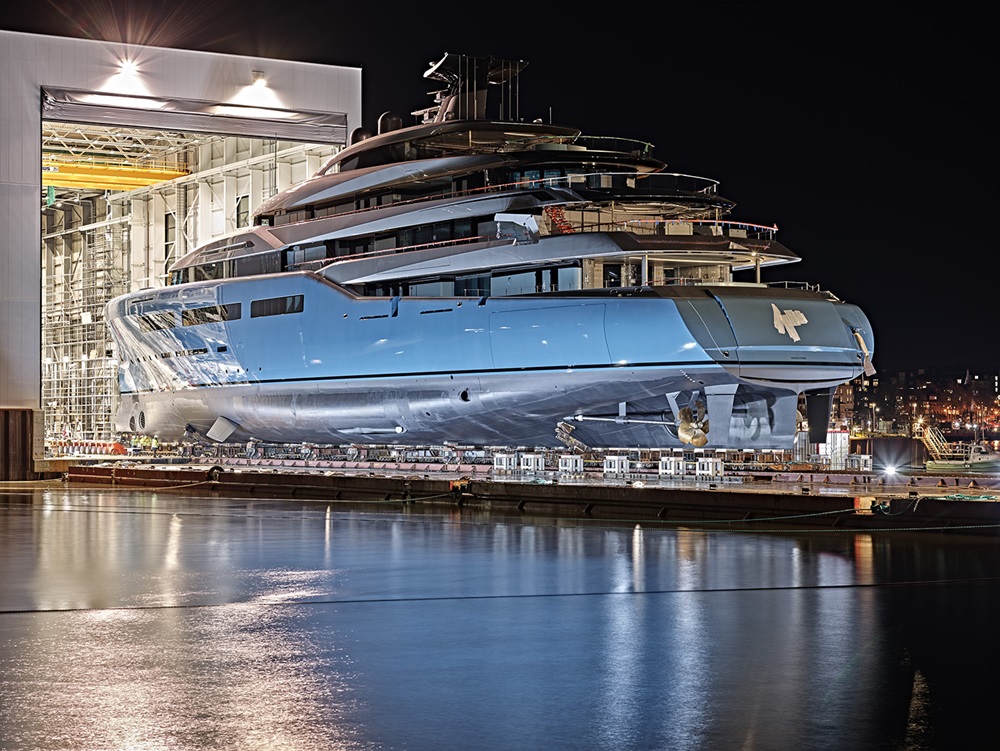 One more thing to keep in mind in reviewing the gallery: Launch occurred 33 months after contract signing. That, too, is quick. Abeking & Rasmussen credits a good deal of prior planning, and avers that same planning will ensure future projects reap the rewards. 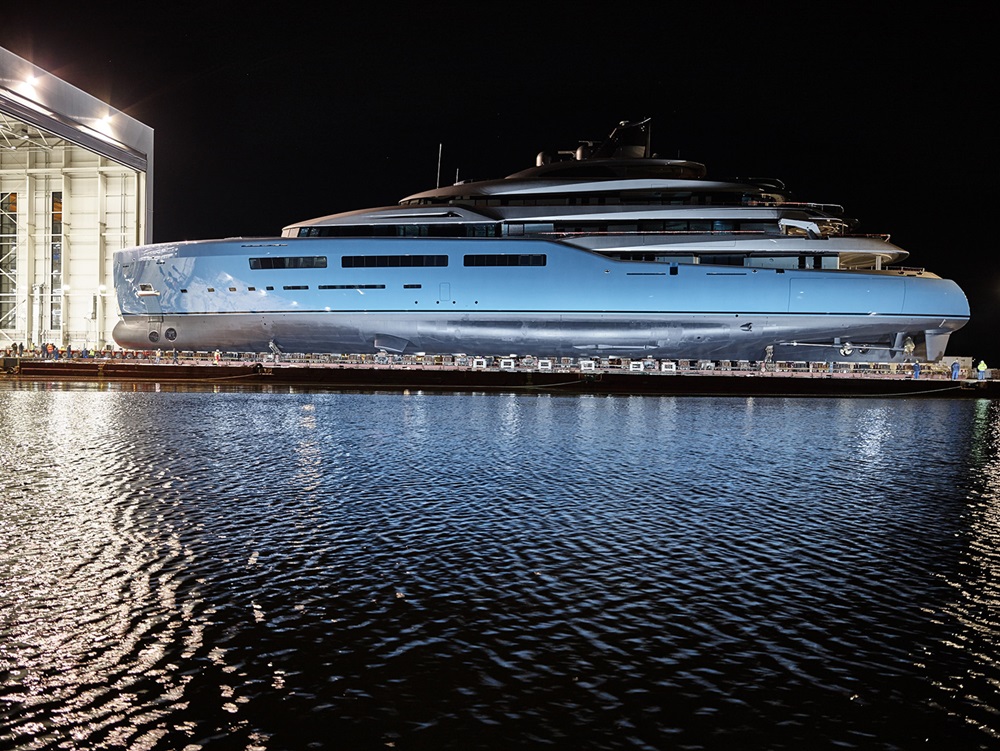 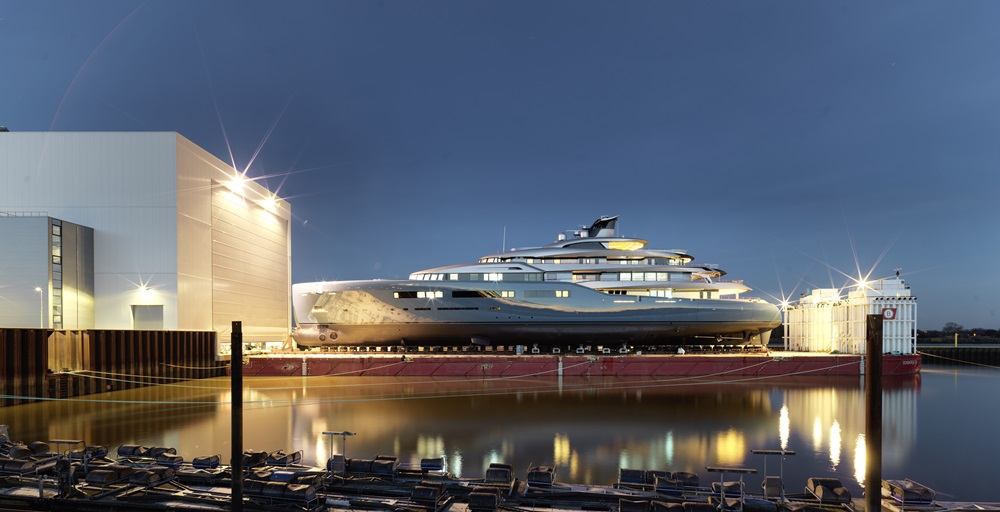 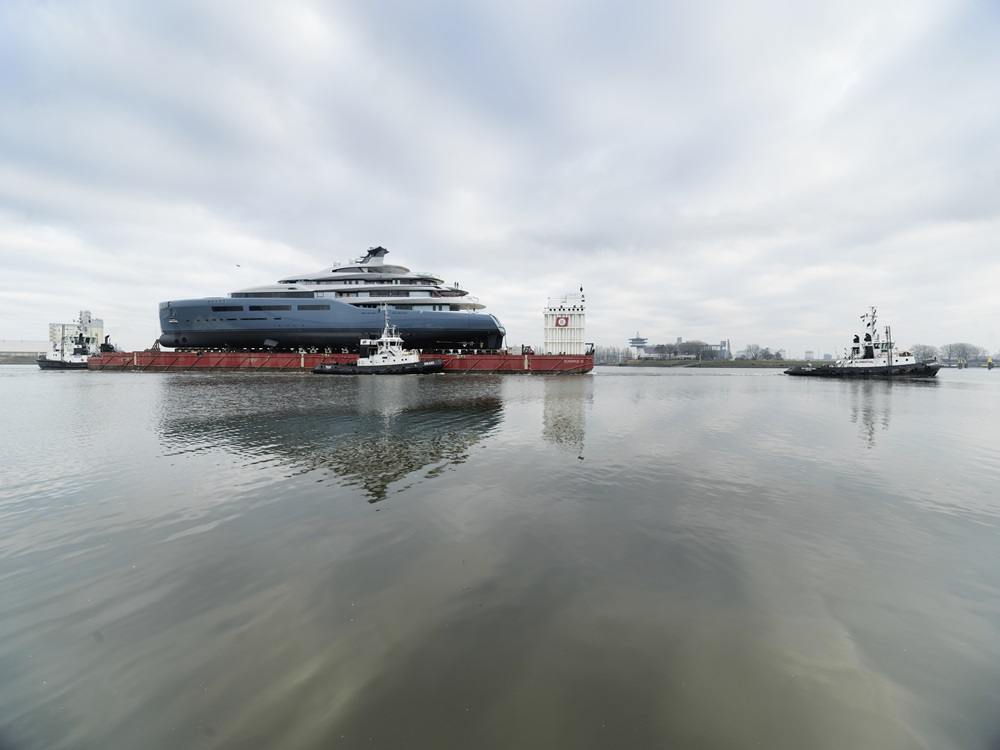 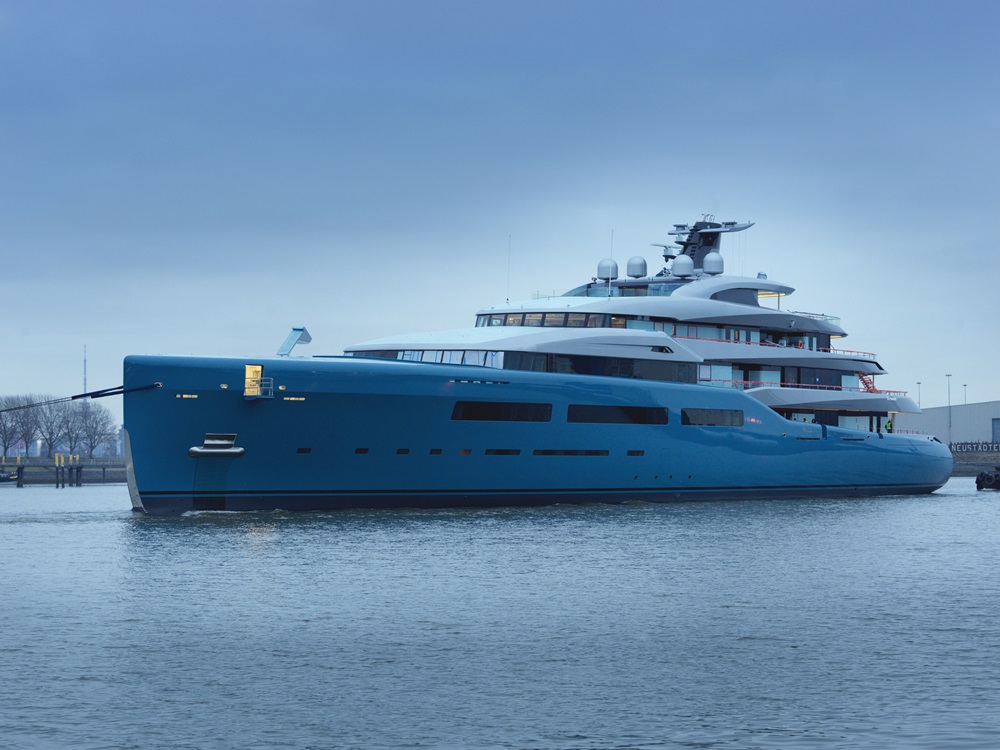 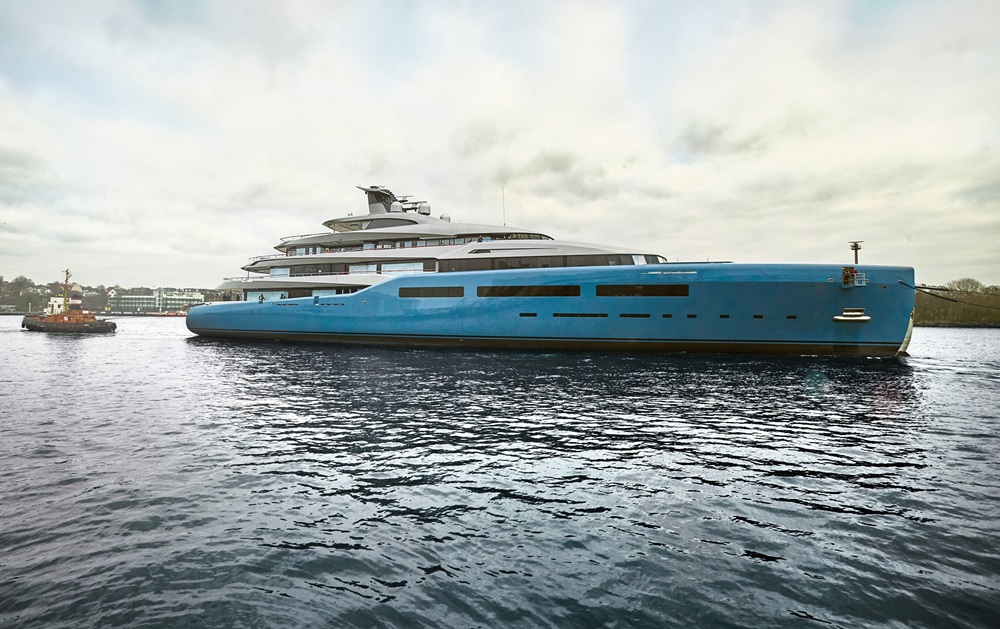