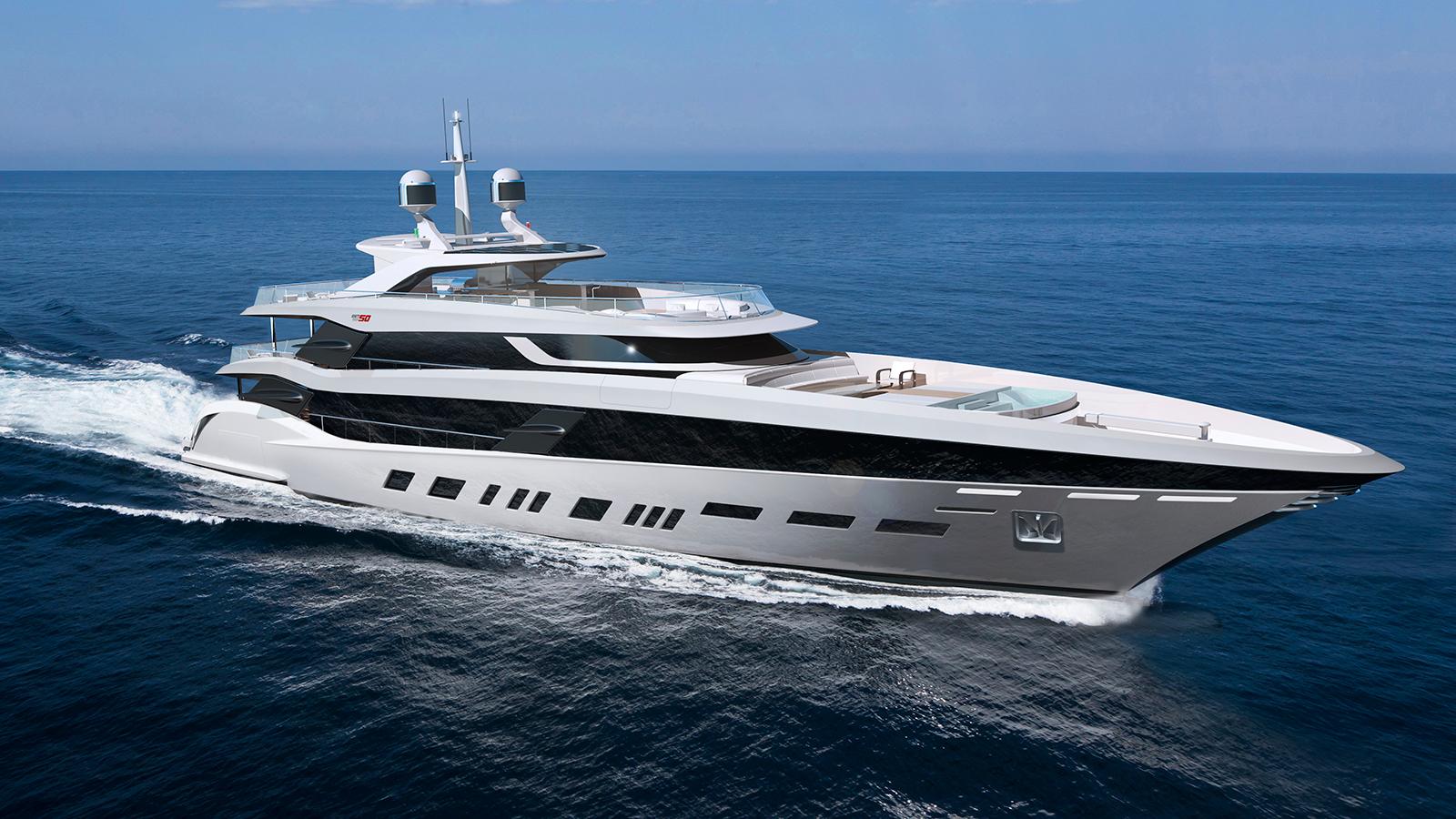 Benetti Fisker 50 – Henrik Fisker
Speed, luxury, advanced engineering, symbols of statusthe crossover between the boating industry and the car industry is closer than ever. Key examples include the yacht-friendly BAC Mono supercar and Adrain Newey, the F1 designer helping BAR’s America’s Cup bid. And now several luxury car brands have turned their expertise to designing luxury boats.
As the brains behind the Fisker Automotive luxury electric car brand, Henrik Fisker is no stranger to innovation, as his 50 metre superyacht concept for Italian yard Benetti shows. The dramatic Benetti Fisker 50 design was unveiled earlier this year to widespread industry acclaim, with strong feature lines on all three decks that take the shape of a regressing wave. The innovation continues inside with a fireplace in the owner’s cabin and a cinema room that can be easily converted into a superyacht gym. 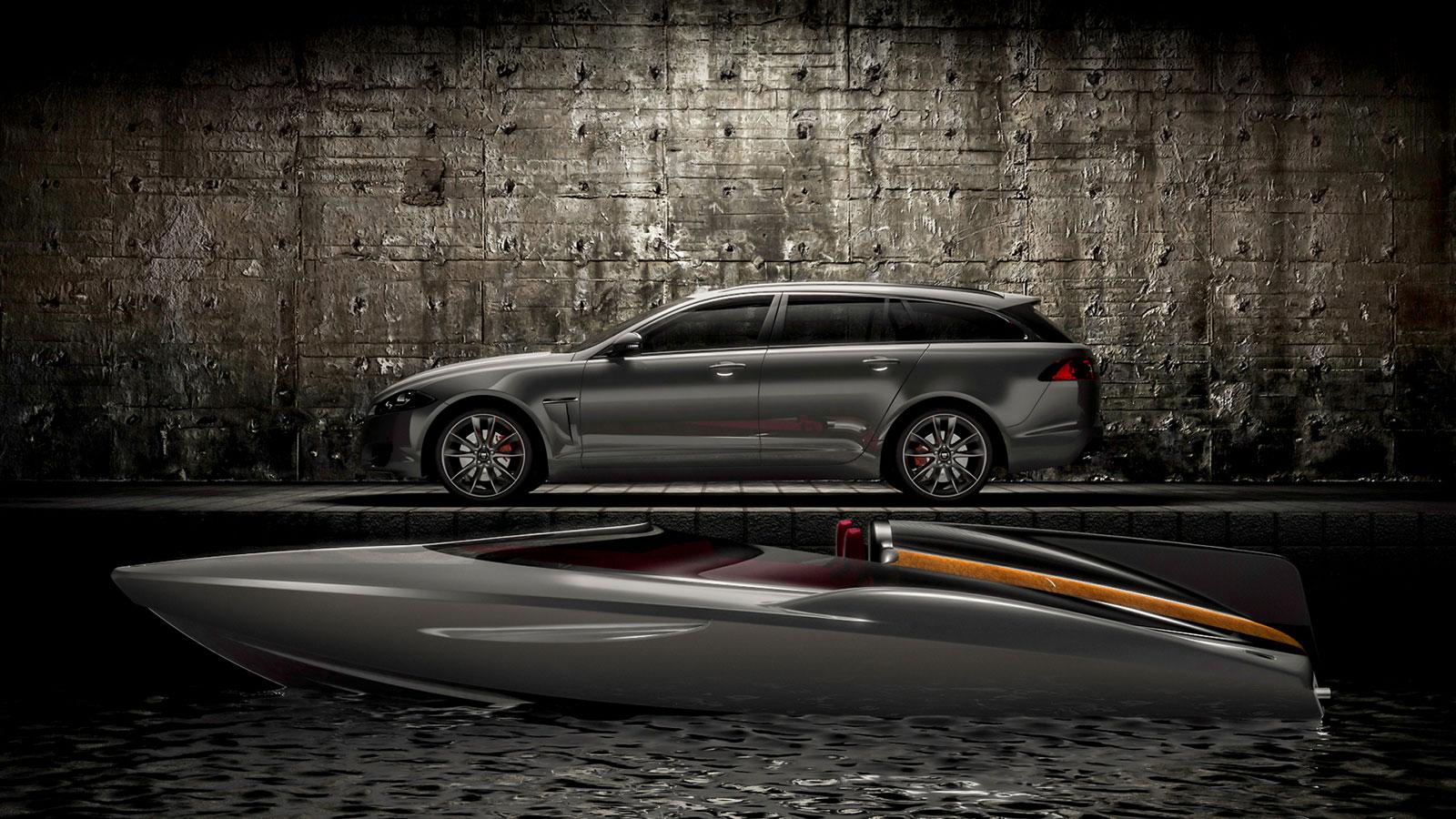 The Concept Speedboat – Jaguar
British car manufacturer Jaguar teamed up with Canadian yacht designer Ivan Erdevicki to create this 6.1 metre speedboat concept, which was designed to compliment the Jaguar XF Sportbrake.
“The Concept Speedboat looks powerful,” said Jaguar’s director of design, Ian Callum. “It follows, in so many ways, the idea of a traditional speedboat but with the sleek and fast characteristics that you would expect from a Jaguar Car.”
The boat is built from fibreglass but has a carbon fibre fin on the deck, inspired by the iconic Jaguar D-Type.
Quintessence AM37 – Aston Martin
The 11.28 metre Aston Martin AM37 has been created in partnership with Quintessence Yachts. Following years of research and development, the first powerboat to bear the famous Aston Martin wings was given a public debut at the 2016 Monaco Yacht Show.
From a company that has provided cars for James Bond, it is only fitting that the AM37 is state of the art and super fast. Twin 520hp Mercury engines will take the sports version to over 50 knots.
The Aston Martin speedboat features an innovative sliding hardtop and a host of on-board computer technologies. The air-conditioning, fridge and espresso machine can all be turned on remotely, while advanced multimedia functions and interactive voice control run the boat’s navigation and entertainment systems. 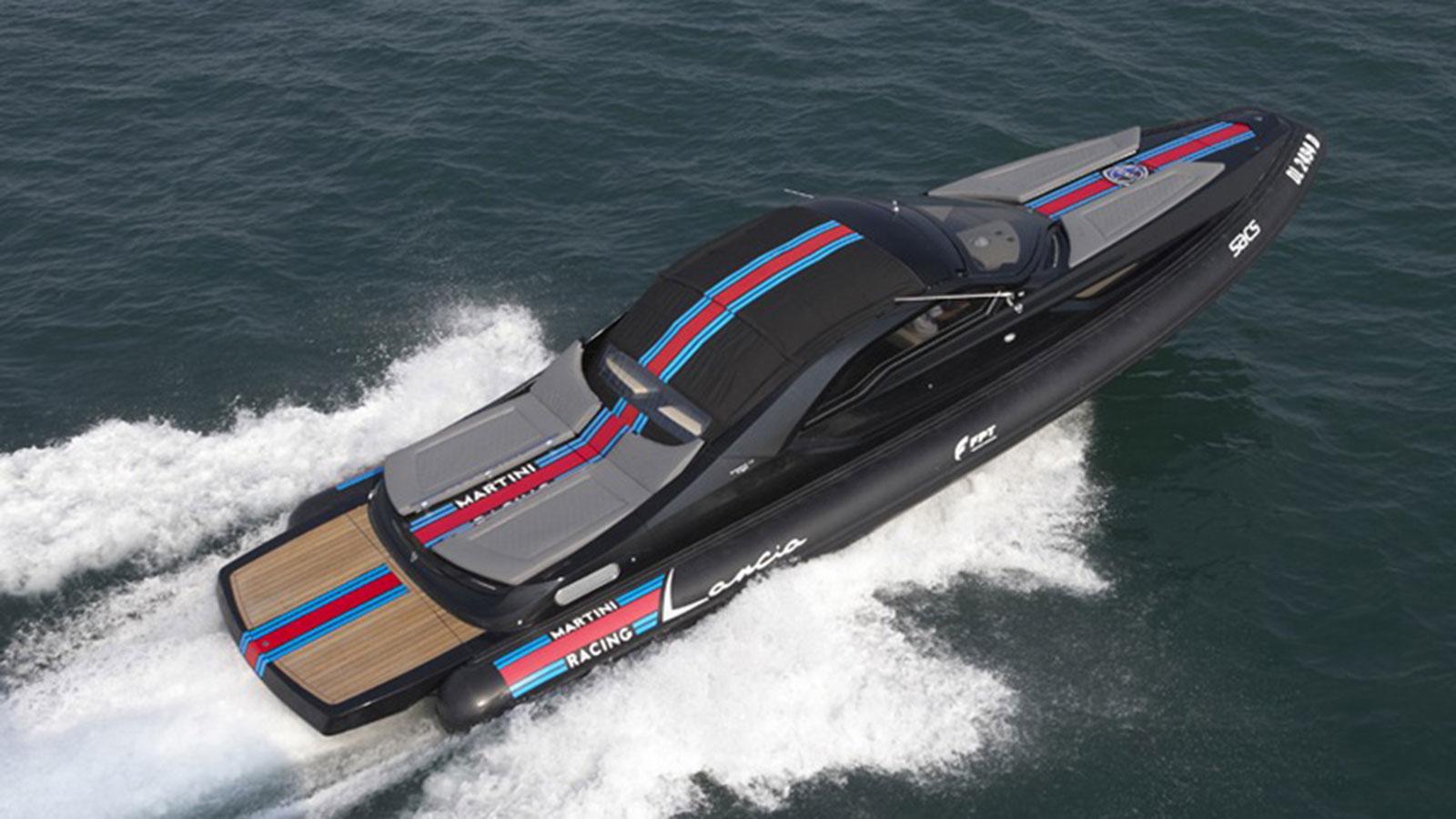 Lancia di Lancia – Lancia and Fiat
The 13.1 metre Lancia di Lancia powerboat was the result of a collaboration between four Italian companies: luxury rib builder Sacs, Fiat Powertrain Technologies, Martini, and Lancia. It was designed to offer the comfort and style of a sports coupe in a boat, can carry up to 11 people, and even has an air-conditioned cabin for two.
The fibreglass hull is made from a mould, but then assembled by hand so that each one is personalised to customer specifications. The folding, electric-powered hood can be raised to protect the occupants from the elements, while the twin Fiat FPT N67-560 engines give the boat a top speed of 55 knots. 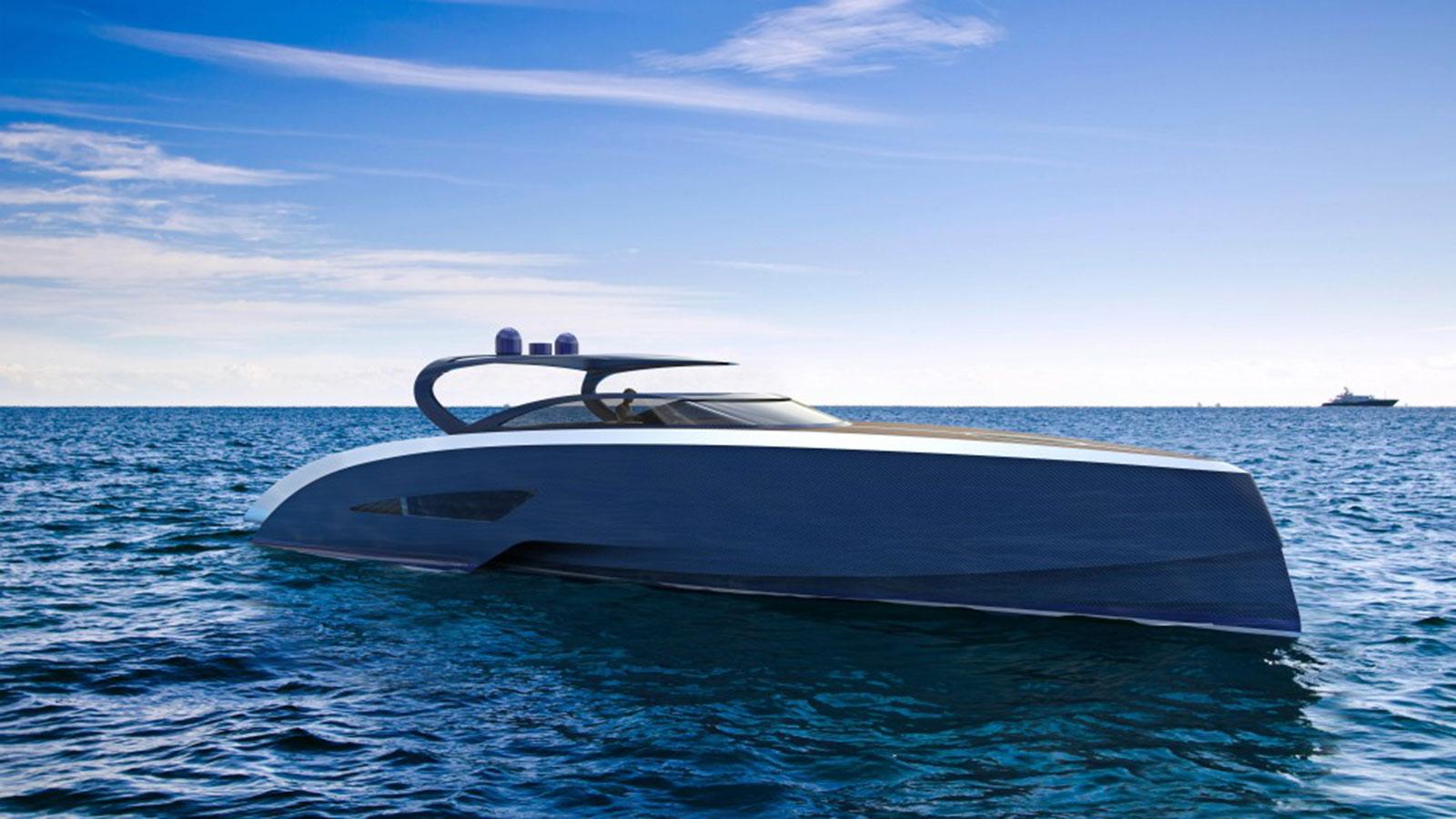 Palmer Johnson Niniette – Bugatti
Bugatti is famous for making the world’s fastest production sports car, but the Italian manufacturer has now teamed up with yacht builder Palmer Johnson to present a series of carbon fibre day boats.
The 12.8 metre PJ42 Niniette, the 19.2 metre PJ63 Niniette and the 26.8 metre PJ88 Niniette are all named after the daughter of Bugatti founder Ettore Bugatti.
The designers say these boats are “characterised by the falling shoulder line of the Bugatti Type 57 C Atlante and the perfectly balanced proportions of the Type 41 Royale”. 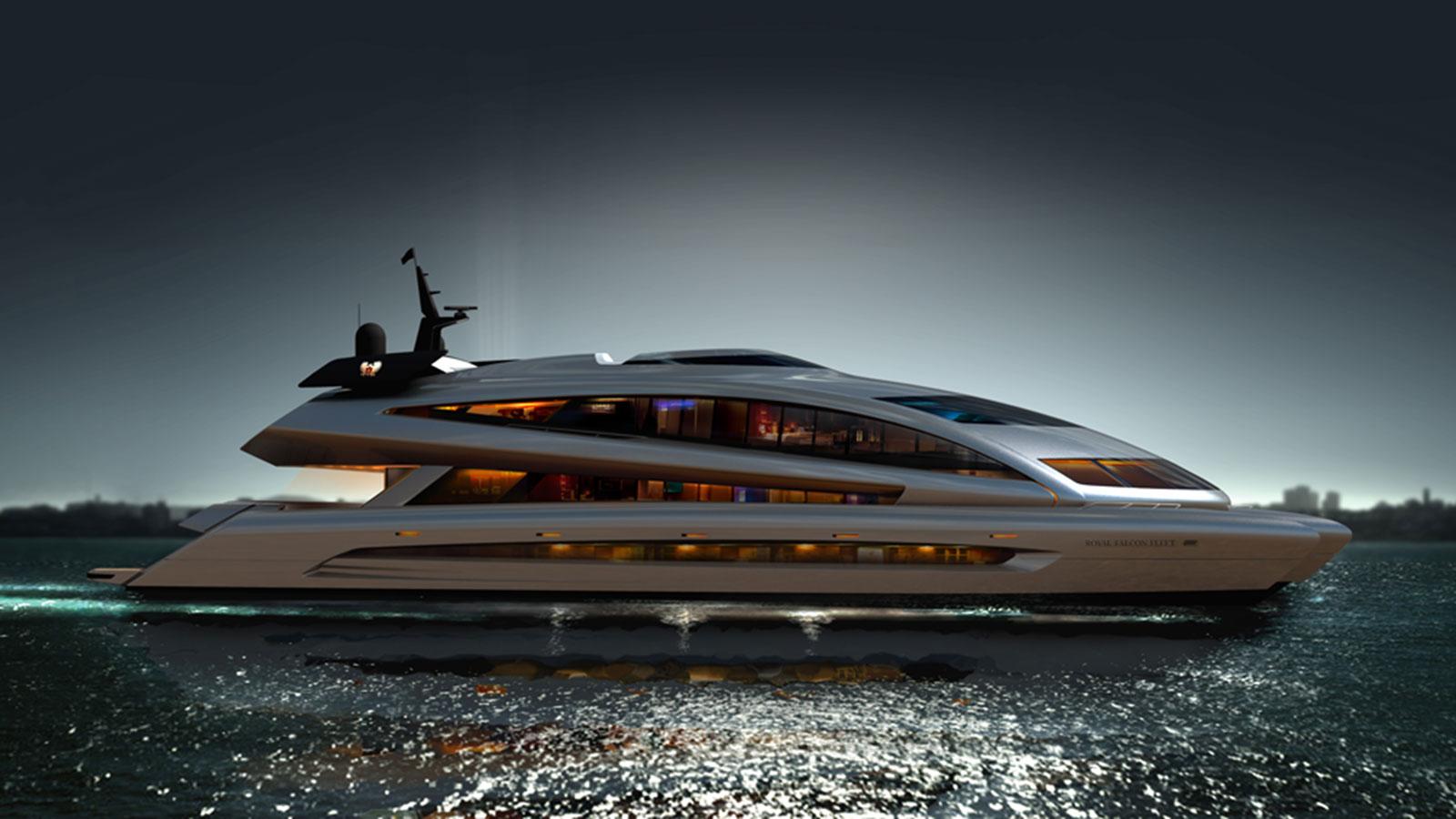 Royal Falcon Fleet 135 – Porsche Design
Porsche Design collaborated with the Singapore based Royal Falcon Fleet (RFF) to design the 41.4 metre RFF135 catamaran. The President of the RFF was looking for a “spaceship on the water,” and the only design parameter was that it had to be a catamaran. The round bilge aluminium catamaran hull form, combined with twin MTU 16V 4000 M93L engines and two water jets, mean the RFF135 is capable of speeds of more than 30 knots. Although construction of the first hull began several years ago in Sweden it is unknown when it will be revealed.