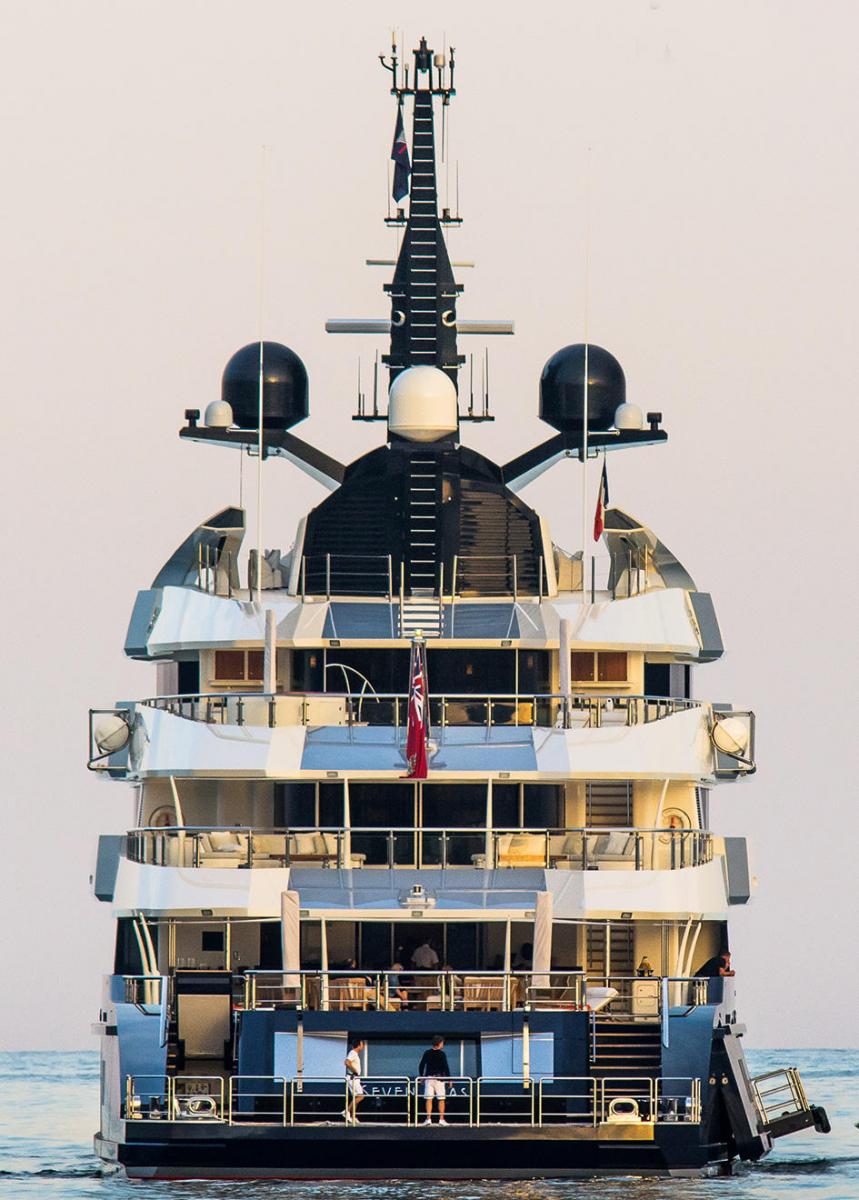 SEVEN SEAS
The aggressively cool 86 metre yacht Seven Seas, was designed by Nuvolari Lenard and launched by Oceanco in 2010 for Steven Spielberg.
There are few yachts that pile on this many decks and still look sleek on the water. The keys are her monochrome paint job, curving sundeck superstructure and a mast with flared satellite dome supports. From the rear she has a sexy, faintly Asian aesthetic; from the side her lines are smooth, forceful and, well, shark-like.
A professional projection system, five metre by two metre screen and two rows of raked seating transform the main saloon into a movie theatre. Another projector throws an image on to the glass wall of the aft infinity pool, so guests can watch while they swim.

“” src=”https://www.phoenicianboat.com/files/news_files/images/2016/October/22-Of-the-Best-Superyacht-AFT-Views/UkNBrKbSbWDcc2RoA7Pc_portrait-Maryah-yacht-aft-Peter-Seyfferth-1260×1760.jpg” style=”width: 100%;” title=”Phoenicianboat.com” />
MARYAH
The 125 metre Maryah, penned inside and out by H2 Yacht Design, was built by Alpha Marine in Greece under owner management. Launched last year, she hit our list of the Top 200 Largest Yachts in the World at number 15, overtaking the 2010 launch from Lrssen, Katara, by six centimetres.
We like a good mystery. Maryah is ultra-private but what we do know about her is fascinating. The hull began life as a Russian research vessel, launched by the Polish Szczecinska yard in 1990. The rebuild yielded a stylish yacht with sweeping curves, accommodation for 54 guests, plus a cinema and helipad.
Sun, sea and splashing around: thats three aft decks, a sundeck, a beach club and a profusion of fold-down terraces.

ESTER III
The 66 metre motor yacht Ester III was launched this spring by Lrssen. She features an angular design by Espenino and ornateFrench classicalinterior styling by Reymond Langton.
Priorities.ino put a helipad and tender garage forward on the yacht so that arrivals and departures wouldnt break the spell back here, lounging by the water in seclusion and peace.
Exterior spaces have been planned as carefully as interiors, with protection from sun, wind, rain, heat and cold, a stunning bar up top and a large glass-backed pool on the mai”” src=”https://www.phoenicianboat.com/files/news_files/images/2016/October/22-Of-the-Best-Superyacht-AFT-Views/UpfTkqApTN6F5DTosQzq_portrait-okto-yacht-rearview-1260×1760.jpg” style=”width: 100%;” title=”Phoenicianboat.com” />
OKTO
This is the curvaceous rear end of Okto, ISAs 66 metre steel and aluminium head-turner.
This platform could easily have taken another deck, but the designers have kept things coolwith the result that theres nothing else quite like it out there.
It takes skill to make 66 metres of yacht look like a low-slung sportsboat, but designers Andrea Vallicelli and Alberto Pinto, working closely with the owner, managed it. Were also promised stellar performance thanks to four months of tank testi”” src=”https://www.phoenicianboat.com/files/news_files/images/2016/October/22-Of-the-Best-Superyacht-AFT-Views/COfDx7nsTDCDB4t30fLO_portrait-axioma-yacht-aft-jeff-brown-1260×1760.jpg” style=”width: 100%;” title=”Phoenicianboat.com” />
AXIOMA
The 72.5 metre behemoth, pictured here with her launch name Red Square, which was renamed Axioma, is the first boat from Turkish builder Dunya Yachtssold during her debut at the 2013 Monaco Yacht Show.
There is nothing as enticing as a perfect pool on a hot day and Axiomas stern lures you in with a window onto turquoise depths. Then theres the cinema, the double-height saloon…. She’s ideal for a yacht holiday, and Axioma is available for charter.
Retract the passerelle and the swim platform transforms from grand entrance into sprawling space for sunbathing, just a few steps from the sea and the pool. Decisions, decisions.”” src=”https://www.phoenicianboat.com/files/news_files/images/2016/October/22-Of-the-Best-Superyacht-AFT-Views/MYPhZRW1SzO89Fz1greY_portrait-luna-yacht-aft-1260×1760.jpg” style=”width: 100%;” title=”Phoenicianboat.com” />
LUNA
Built for Roman Abramovich as a replacement for his explorer Le Grand Bleu, 115 metre Luna is the worlds second- largest expedition yacht. She was sold last year for more than130 million, making her one of the most expensive superyachts sold in 2014.
Luna may be hard as nailsbuilt to Ice Class at the German commercial yard Lloyd Werft in 2010but her graceful lines by Newcruise could still turn heads on the dock at Monaco.
Her main aft deck is vastabout a third of the yachts length overallbut when the weather cools the massive beach club provides a chic shelter with an o”” src=”https://www.phoenicianboat.com/files/news_files/images/2016/October/22-Of-the-Best-Superyacht-AFT-Views/rc9EiCpBRdOWSOF4x0QC_portrait-zefira-yacht-aft-1260×1760.jpg” style=”width: 100%;” title=”Phoenicianboat.com” />
ZEFIRA
This is the perfectly formed transom of the 50 metre sloop Zefira, winner of our Sailing Yacht of the Year award at 2011s World Superyacht Awards. She was built for Boat International OwnersClub members Paola and Salvatore Trifir(since sold), who brought together the dream duo of Ed Dubois and Rmi Tessier for the design.
Shes big but sleek, with long, clean lines and an uncluttered deck, making this carbon and aluminium yacht one of the coolest afloat. And shes fast: hitting 18-19 knots.
The minimal, pared-back exterior dovetails perfectly with the light and bright Rmi Tessier inter”” src=”https://www.phoenicianboat.com/files/news_files/images/2016/October/22-Of-the-Best-Superyacht-AFT-Views/gc0auTfVQaucFPfcOeMj_portrait-yacht-palladium-1260×1760.jpg” style=”width: 100%;” title=”Phoenicianboat.com” />
PALLADIUM
This 95 metre Blohm+Voss superyacht Palladium is utterly bespokefrom custom electronics to a throw-out-the-rule-book layout, the coolest of pools, and furniture that coils and flows its way through the interior.
The curving lines of Michael Leachs design are either space-age or 1970s, we cant decide which; in any case their undulating, organic forms meld beautifully with the seascape.
The central section of the 12 metre bathing platform lowers into the water and tilts forward to ease launch and retrieval of toys. The garage, meanwhile, holds two 10 metre Cougar tenders and so many toys that the stern sometimes looks like a Formula One pit.
CAKEWALK
The 85.6 metre superyacht launched as Cakewalk, now renamed Aquila, is the longest US-built yacht since the 1930sand the biggest yet in terms of volume. Launched in 2010 by Derecktor, she was designed externally by Tim Heywood, with Elizabeth Dalton taking care of the interior.
Size matters, right? With a huge 2,998 gross tonnage, she packs an awful lot into her LOA.
The vast tender garage means its toys galore, with Aquila holding a gorgeous Riva Cento and 55-knot Intrepid, shown here. Thats not forgetting the Yamaha WaveRunners, full scuba sets, SeaBobs, kayaks, bikes and all the kit for an amazing beach party.
INVICTUS
The mighty Delta-built Invictus, with a name like a Hollywood blockbuster, towers above the water. Indeed, she looks much bigger than her 65.5 metre length would indicate.
This yacht is all about volumeat 1,945GT shes got gross tonnage to spare. This allowed the designers to create truly spectacular spaces on board, not least the amazing beach club.
The already spacious water-level lounging area is made larger still by a vast, fold-out bathing platform, and behind it all is a bar. Small wonder this is a popular spot on board. The garage beyond can hold two 8.35 metre tenders, including a gorgeous Comitti.
<"" src="https://www.phoenicianboat.com/files/news_files/images/2016/October/22-Of-the-Best-Superyacht-AFT-Views/OTw9UhfrQxC3SYgUF6Da_portrait-hemisphere-yacht-1260x1760.jpg" style="width: 100%;" title="Phoenicianboat.com" />
HEMISPHERE
All hail Hemisphere; at 44.2 metres, the Pendennis boat is the biggest sailing catamaran in the world.
Have you studied that beam? From bulwark to bulwark, Hemisphere spans 16.6 metres, an incredible width given her length. That beam gives you huge expanses of glorious deck for doing, well, as little as humanly possible.
The main 8.2 metre Scorpion tender is housed in a space beneath the aft deck and is deployed through bomb bay doors. You read that right. The second tender sits in the starboard hull, a section of which hinges up to let the 4.5 metre Castoldi out.

GALACTICA STAR
Galactica Star is Heesens award-winning 65 metre extravaganza.
The whole stern is devoted to a palatial beach club, with tenders and toys relegated to a forward garage, giving designer Frank Laupman maximum space for his imagination.
The space is backed by cascading LED lights, while a skylight in the roof opens onto the pool on the main deck abovea feature that helped her pick up a World Superyacht Award in 2014.
“text-align: right;”>
Credit to: Boat International